My friends recently got married and I wanted to share their gorgeous engagement photos. Because the groom, Mark is a pilot, this couple wanted some fun engagement portraits at the airport. It was the perfect location and very creative, even down to the details of their costumes.

I love how these turned out. and always love to do location photo shoots, especially when the location incorporates something about the client’s personality. Everything in a photo should tell a story about you, and not be random. So being at the airport was the perfect choice for these two. 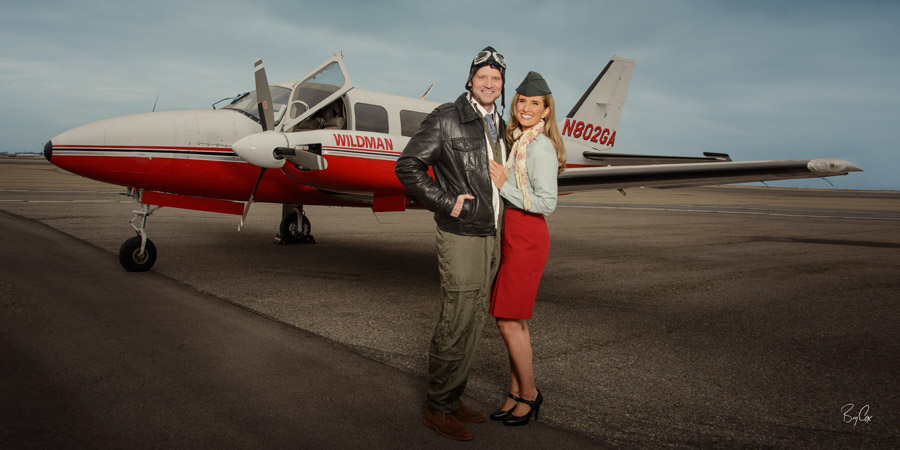 From the perspective of a photographer, notice how clean and empty the images are. Only what’s important is in the frame. I worked with the airport to angle the plane on the runway in the best angle possible. One direction would have shown the hanger, another the tower. This angle had the cleanest sky and horizon.

The sun angle was important too, but I knew I had studio lighting with me to override that, so it was less important. Besides, the sun was high up so I knew I’d be using it as an edge light. I packed my Profoto B1X knowing that out in the open with no shade, I’d need to overpower the sun. With different modifiers I could soften or sharpen the light, and I also had a lot of power to shoot quickly because that light recycles extremely fast.

It was a cold winter day and they were short on time, so we had to work fast. To compensate for the difference in elevation with the couple standing on the wing, a ladder was needed to get the angles just right. And being winter, the sky, coloring, and natural light of the air was gray and drab.

The addition of this studio light on location was needed to really make the colors and the sky pop and create shadows and dimension. The results are wonderful skin tones and gorgeous colors. 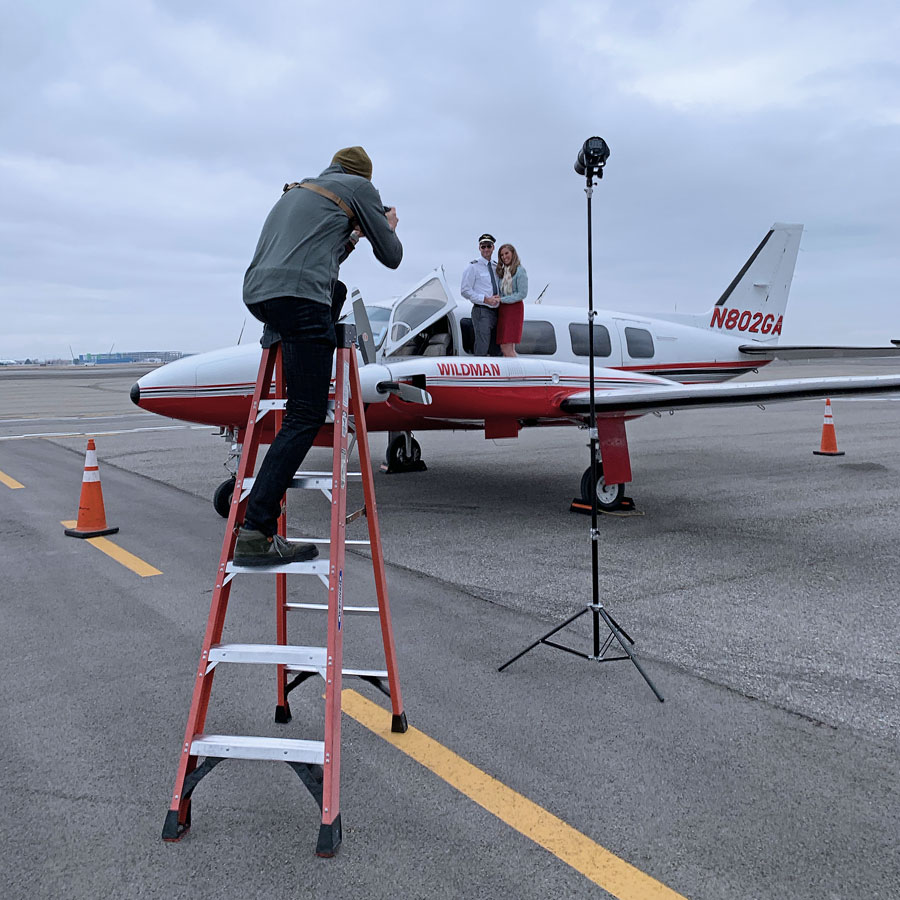 Notice all the distracting elements too in this behind the scenes image. There are orange cones that had to be there, yellow lines on the ground, and other visually obnoxious items like reflective stripes on the wheel chocks. I moved cones temporarily where I could, but also removed them digitally in the final images. Also the yellow stripe was either toned down or removed, and other distracting elements removed.

Because the couple was short on time, this entire shoot from the first shot to the last was about 25 minutes. In that time we were able to get a lot of variety, all beautifully composed, posed, and lit.

We had a lot of great choices and I love them all, especially this one of these two running off together. One idea for their invitation was to have the images as old snapshots. So I cropped them square and treated the images so that they had a faded film look. Here was one idea of them as a trio.

Here are those squares close up. I treated them with some of my faded film Photoshop actions to give them a nostalgic look. 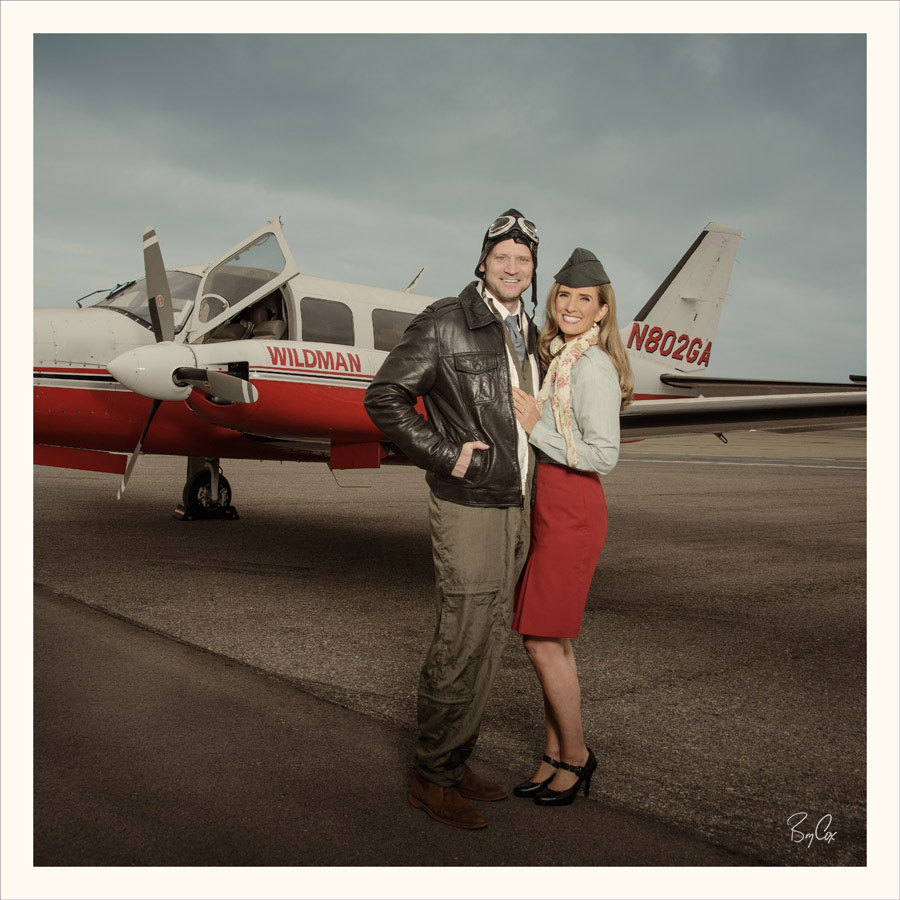 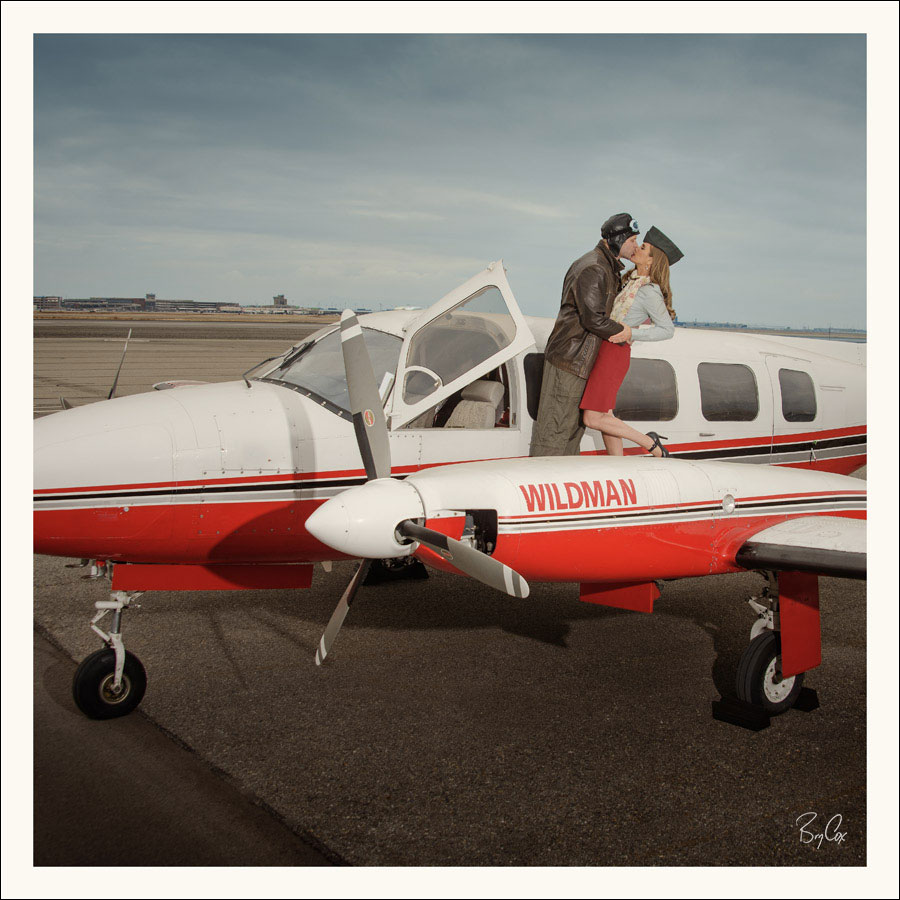 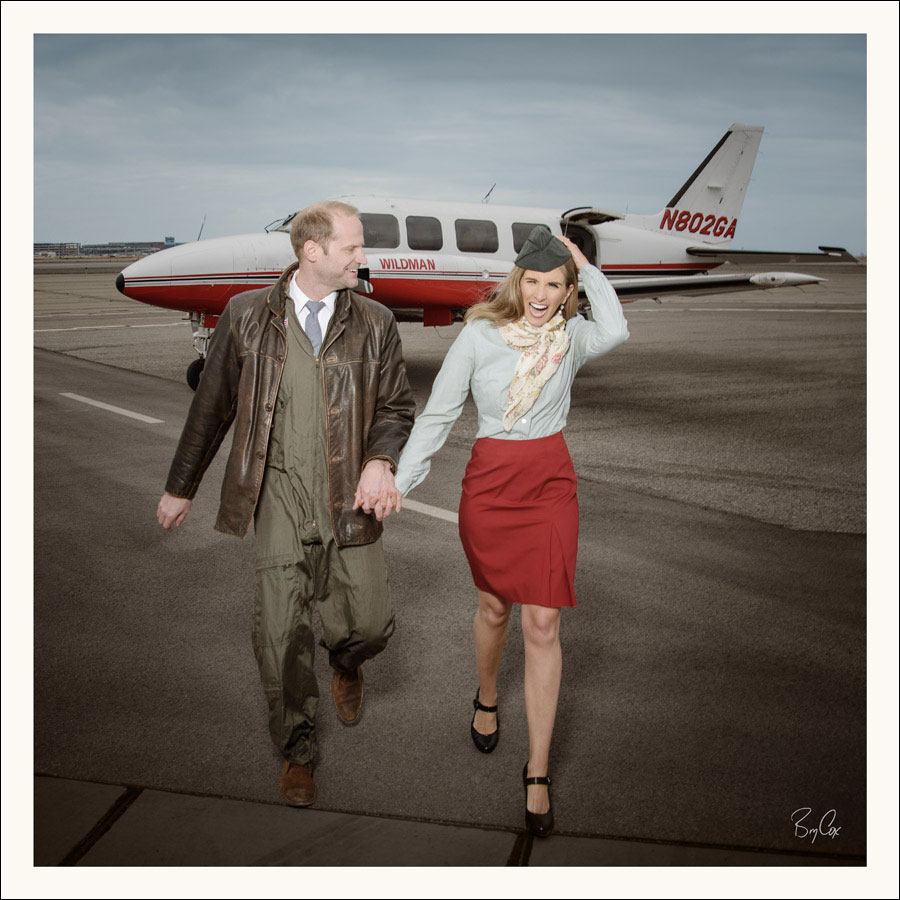 Their final invitation design was an airline ticket, and this was the back of the design. I shot this using the old wood on my coffee table. 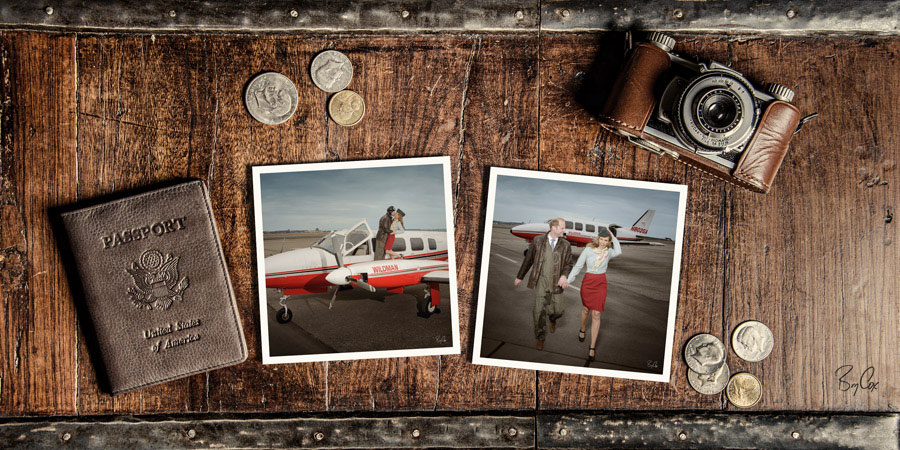 Before ending the shoot and entering the hanger, I did a couple individual headshots of these two as well. Here are my two favorites of those, cropped as squares with an old film edge. 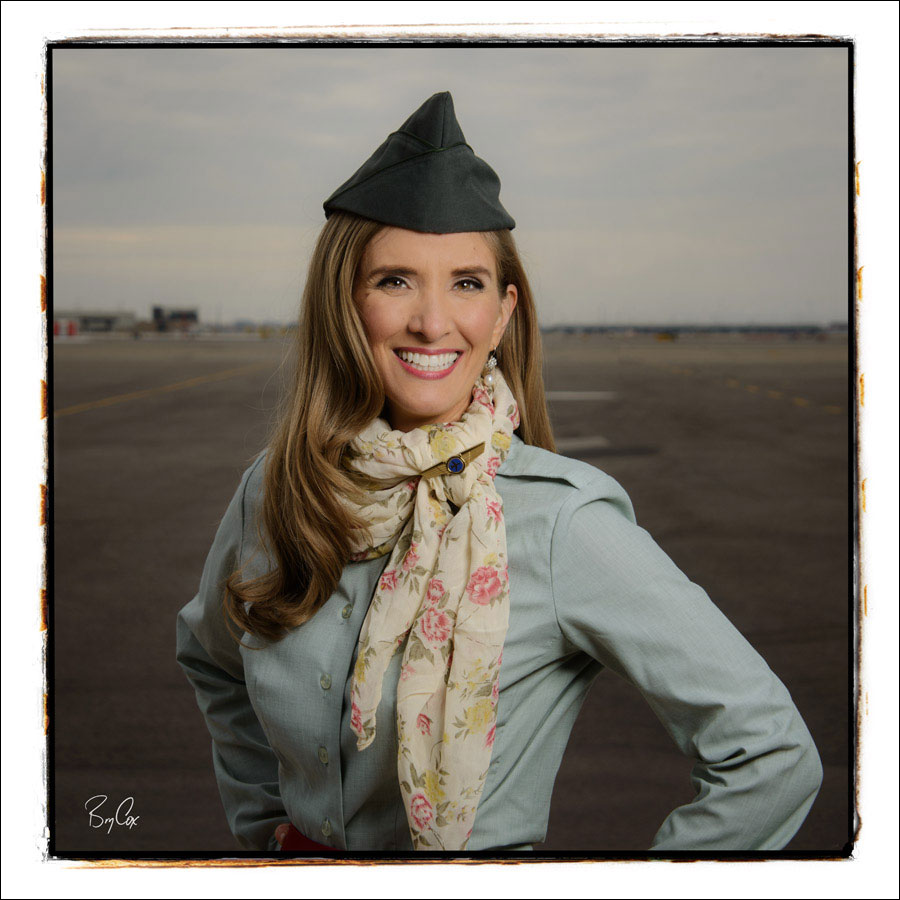 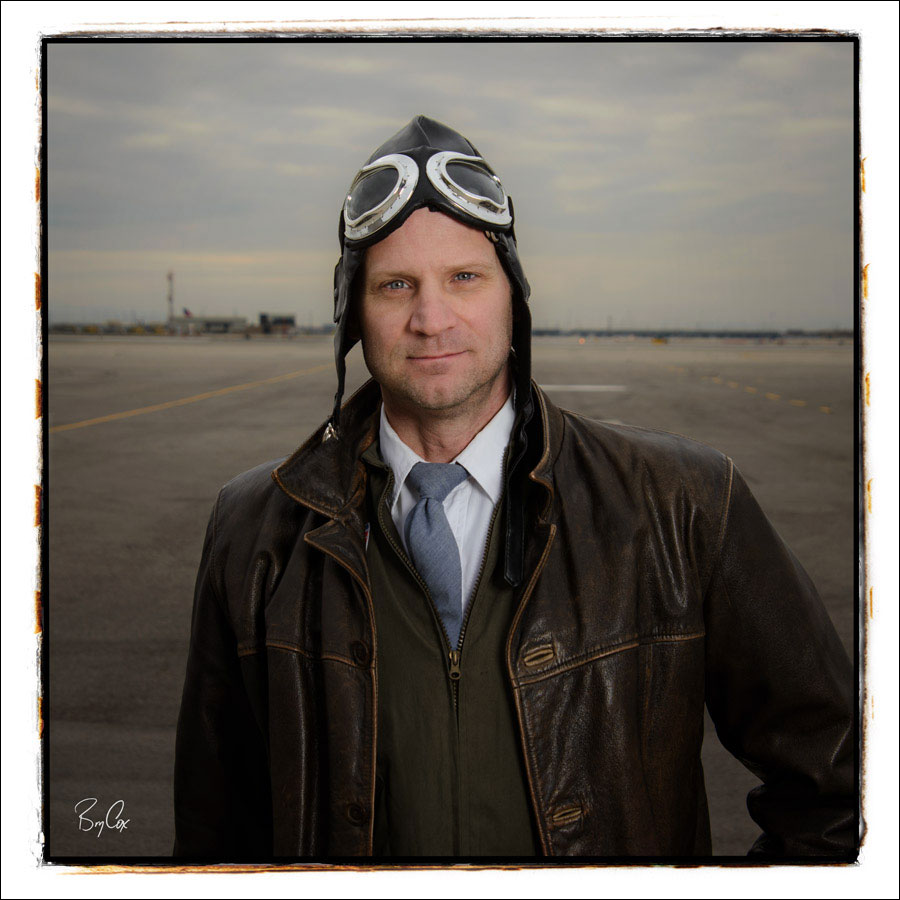 I’m so excited that these two are married. They’re both fantastic people individually, and both incredibly accomplished in so many ways. They’re really good together, and they both compliment each other as a couple. I know they’ll make a great team and I’m glad they’ve moved forward with engagement and marriage.

And until next time, America.