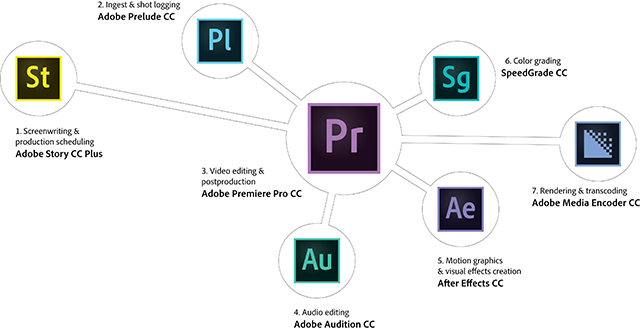 Adobe announced today some new updates coming to the suite of video apps.

These updates are not yet publicly available, but changes will mean being able to update a master clip in Premiere Pro and have those changes ripple through edited versions of those clips in a sequence, editing text from an After Effects composite without leaving Premiere Pro, a more flexible Direct Link to SpeedGrade through Premiere Pro which also includes Master Clip grading, new support for Dolby Digital and Dolby Digital Plus in the Adobe Audition app making it easier to create deliverables for broadcast, and many more improvements including video apps like Adobe Story CC Plus that helps in the screenwriting process.

I’m working on some tutorials for photographers who want to get more into video production. Perhaps you need to make a really cool photo slideshow, or maybe you want to shoot some video with your digital SLR and mix that with some images for a multi-media production. The Adobe Creative Cloud suite of apps is perfect for you, and the improvements coming make it even easier whether you’re working with green screen, or just need some speed in your final video grading.

If you’d like to read up on details on what is coming to the suite of video apps, see these links below.