Today, Apple made some big announcements at the WWDC 2012 Keynote, including a new line of MacBook Pros with Retina display and up to 16G of ram, their new operating system iOS 6 for iPhones and iPad, Mountain Lion for the Mac, and much more!

Only developers and insiders can attend WWDC, but the keynote program went live a little while ago and can be viewed on the Apple website. You can view it by clicking on this graphic below. 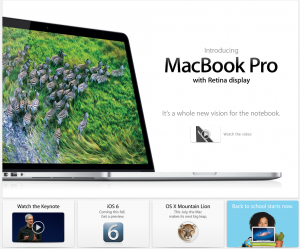 If you’re not familiar with the Apple Retina displays, they are so crystal clear, your eye can not see pixels. Text looks sharper, images more clear, it is really amazing. Currently the Retina display comes in the iPhone 4, iPhone 4s, and “The New iPad” (what people call the iPad 3). Having this screen on a laptop will be fantastic, especially for photo editing. Adobe is coming out with a version of Photoshop that will support the new Retina display on Macs.

Some of the other cool new things I’m excited about especially in the new iPhone/iPad iOS 6 are the new Siri improvements and ‘Apple Maps.’ Apple originally showed Google the ground floor development of the iPhone in order to have them develop a map app for it, but Google then went and stole much of the iPhone’s features, design, and even look for their Android phone. They were able to gain some immediate market share, but have not been able to keep up with Apple’s continual iPhone innovations or slick ease of use or beautiful apps. (NEW UPDATE BELOW)

Nevertheless, Apple has taken Google’s moves very seriously and have slowly distancing itself from Google and now they are dropping Google Maps as it’s default mapping program for their own default “Apple Maps” program which looks like it will be a lot better.

That’ll mean a lot of lost ad revenue for Google, and a better mapping solution for iPhone/iPad users. I’ve been watching the rumor-mill on the mapping subject for about a year now, and Apple has really spent some time acquiring and developing new technology for their own mapping program. The fly-by video I saw a year ago looked awesome, and I think the final product will be even more amazing!

Instead of flat photo views from above, they’ve been creating 3D models of cities and terrains by flying planes with cameras all over. The 3D models are also vector based so they load fast and will work great, even on slow networks. Today Apple showed some new preliminary fly-by videos, and they looked very cinematic and amazing, even better than before. And the entire mapping app has new turn-by-turn directions using the voice of Siri.

Besides the Maps, Siri is incorporated much more into the OS. In fact, it seems that Siri has been very much improved and if I understand it right, Siri will not be in Beta anymore and will be released system wide across all devices that support iOS 6, including the iPad this fall. I’m particularly excited for that, as I’m getting very used to talking to my iPad using dictation, and would love Siri to take that further.

Facebook is now integrated right into the iOS 6, which will make it much more stable and user friendly. They say the APIs are more user friendly for the new Facebook too, so other iPhone apps that interact with Facebook should work much better too.

Finally, FaceTime now works over cellular, and not just WIFI which is great! I love to keep in touch with friends and family using FaceTime, especially when I’m traveling, and being able to use it anywhere even without WIFI is fantastic!

Apple also announced their new Mac OS called Mountain Lion along with tons of new features. To compare, Windows offers its operating system at various price points, the best version costing almost $200 a machine. Mac offers one version, their best, and this new version, Mountain Lion will sell for only $19. And that price is not just for one machine, but for up to 5 machines that you own! It offers some cool features like PowerNap (updates while asleep), iCloud tabs (safari tabs can sync across devices), and dictation.

I am simply amazed at what Apple is able to continually invent, and I often wonder why other companies continue to fail at coming up with new things, but instead just keep copying Apple. It really seems that no one can create devices that are as easy to handle and use as Apple, and no one creates products that people LOVE to use as much as they love to use Apple products. I am always amazed at what they are able to do.

Well, I’ve mentioned some of my favorite new things from the keynote here, but if you want to see everything, it’s well worth watching the keynote.

UPDATE: June 13, 2012 – MacRumors has posted that not all iOS6 features will be available on all older devices. I was expecting that news, but hoped otherwise. So yes, Siri will work on my new iPad, but won’t work on my older iPhone 4. Here is a chart of other features. 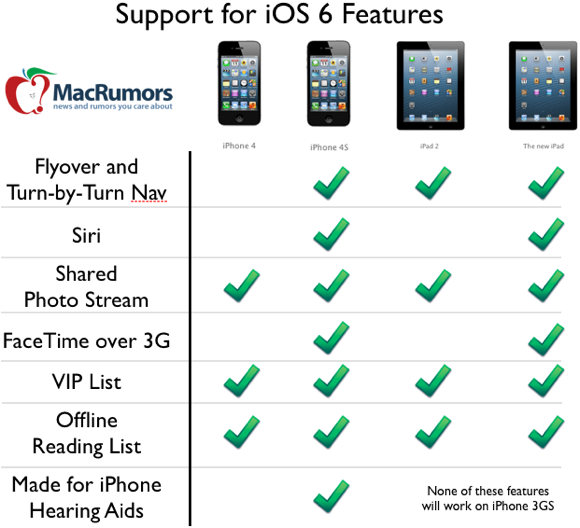